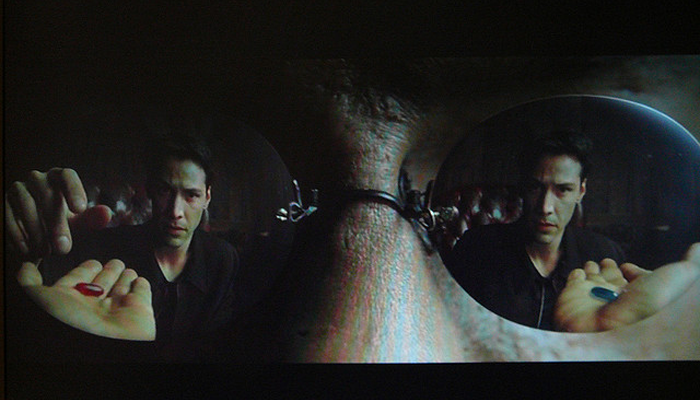 Choking On The Blue Pill: Profit-Producing Lessons From The Matrix

I‘m a self-confessed movie junkie, which is a damn annoying addiction to have when you’re self-employed like I am.

Once the thought of catching a flick has been planted in m’head, I’m done for.

I must watch one, or else I’ll slowly go mad until I scratch that itch.

I gotta confess, it’s my weakness. Veritable kryptonite that can reduce this particular direct response web designer to a pathetic mess, until he gets his flick fix.

There aren’t many movies I’ll watch over and over again though, I’m usually a “pump and dump” sort of dude when it comes to films.

But The Matrix is one I keep coming back to.

You see, the Matrix is a lot more than just a regular ‘auld movie, I’ll have you know.

If you’ve not seen it , I’ll give you the Cliff Notes.

Neo, geek programmer extraordinaire has a feeling something is not right with the world. That all is not what it seems. He is contacted by a slinky female hacker named “Trinity” who tells him a mysterious dude called Morpheus can give him the skinny as to what’s really going on in the world.

But before he can meet with Morpheus, three dark suited “Agents” attempt to apprehend Neo. He manages to escape to meet Morpheus who explains the reality of the world he lives in.

He offers Neo a choice.

He can take the “red pill”, which will reveal to him the truth of the world he lives in.

One of unaware enslavement and subservience to a conquering force of intelligent machines.

Or he can take the “blue pill” and stay where he is, blissfully unaware of his current reality. He will continue to live as a slave within this conquered world, oblivious to the reality in which he lives.

So Neo swallows back the red pill. He embraces reality as it is. He sees things as they are.

A bit like direct response web design. “Red pill” web design, if you will…

Web design that cuts through the clutter and deals your prospects a dose of reality.

No fluff. No irrelevant aesthetics. No fancy graphics.

Just empathy of your prospects pain and problems, demonstrated with clear, illustrative design and sharp, compelling copy that shows you are the man or woman to solve it.

But it’s not for everyone..

The red pill can be difficult to swallow. Not everyone wants to embrace “red pill” web design.

There are some who still think their logo matters. Or maybe they believe they won’t make any sales unless their branding is just right.

They still think these are important criteria in determining whether a customer does business with them.

Failure to embrace reality is a common problem I’m afraid. One doesn’t have to look very far to see how much of a common issue it is today in Irish life.

Plenty of people hold onto the “blue pill” like some sort of kiddies’s security blanket.

Lots of business owners too.

And they pay the price with mediocre sales and puny profits.

But those who embrace a red pill philosophy live life as it should be, on their terms only.

So if you’re ready to embrace “red pill” web design then you need to give your own personal Morpheus, Keith Commins, a call on 087-7426631, to get you snapped out of the Matrix post-haste to see profits pouring into your business.

PS: You know the main problem most business owners have with direct response marketing in general? Well, it’s not that it doesn’t work, and it’s certainly not its effectiveness. It comes down to a couple of little things : cojones.

It’s tough to position yourself the direct response marketing way, that’s for sure, and make no mistake there will be people who will judge you for it.

Dan Kennedy once said, “if you haven’t pissed off someone by noon than you’re not doing a good enough job”.

And just who is Dan Kennedy? Tut, tut…

Well, mosey on over the next blog post to find out..

Previous post: Your Opinion is Irrelevant, Only The Market is Right