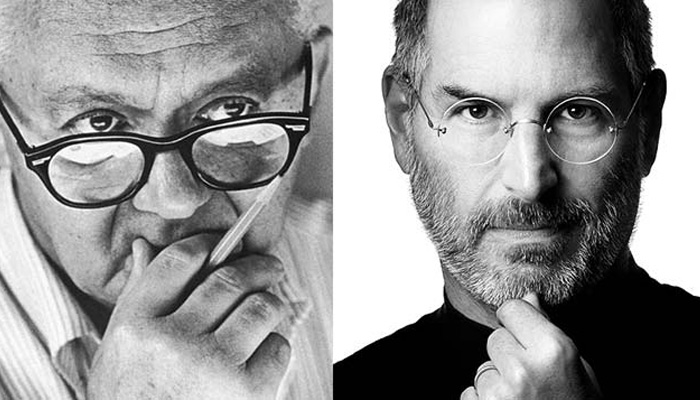 I will solve your problem, and you will pay me

“I will solve your problem for you. And you will pay me. And you don’t have to use the solution. If you want options, go talk to other people. But I’ll solve the problem for you the best way I know how. And you can use it or not – that’s up to you. You are the client. But you pay me.”
Paul Rand, Designer

Those who regularly read my blog posts will know that I often criticize the role of design in advertising and marketing.

How design and “branding” get in the way of marketing’s one, true purpose, which is to sell.

Well, be that as it may, it may come as a shock to hear I actually love great design, and appreciate fine aesthetics when I see them.

One of my favourite designers was a dude named Paul Rand.

Hired by Apple supremo Steve Jobs to create his “NeXT” project’s corporate identity, a company Jobs founded when he was turfed out of Apple following a boardroom coup in 1985.

Rand was arguably one of the most influential designers of his generation, responsible for many well known corporate identities, from IBM, Enron to UPS… amongst others.

Great designer as Rand was, it was his attitude I’ve always found appealing.

Rand had a very simple approach to how he dealt with clients: he solved their problem for them. He didn’t mollycoddle them, or otherwise placate any divaesque behaviour.

He focused on one thing: solving their problem as best he knew how.

By adopting this no-nonsense approach, the client was the ultimate winner.

The client got what he ultimately desired: his problem solved.

And when it comes to how I like to deal with clients, I adopt a similar mantra.

I will solve your problem for you. You will pay me, and pay me well.

But I will place your business in a position far beyond where it was previously.

Now there are those who won’t like this approach. In a world where emasculated eunuchs which masquerade as men are the norm, those who adopt a more honest and forthright stance are often mocked and ridiculed.

In the final analysis though, it’s the emasculated approach which costs more.

One where due to a lack of honesty, problems are glossed over and pain points are ignored, to the ultimate detriment of the client.

It’s an approach I despise, and will have no part in.

Which approach do you prefer?

If you wish to deal with someone who will give your business the forthright honesty its needs to succeed online then you need to schedule an appointment with me, Keith Commins, to start fixing your problem today.

I ain’t cheap, but professionals never are.

If you think hiring me is expensive, wait until you hire an amateur.

But I will solve your problem for you.

“An object at rest stays at rest and an object in motion stays in motion with the same speed and in the same direction unless acted upon by an unbalanced force.”

Newton was a savvy old bugger in his day, and I reckon he would have made a damn good marketer. He could have just as easily been conducting his theories on websites, rather than apples.

You see, no matter how good or bad your website, unless it has visitors, it will forever stay at rest.

But by acting on it with the “unbalanced force” of paid traffic, that motionless object suddenly sparks to life.

All this week, I’m offering you the chance to have your traffic generation managed for free, for the whole month of December. That’s a silly season choc-a-block with traffic, entirely managed by myself.

It’s an offer that’s conditional on the purchase of a direct response web design, and it’s one I may not repeat for a long, long time, if ever.

Tags and you will pay me, apple, facebook, i will solve your problem, newtons first law of motion, paul rand designer, steve jobs, traffic generation