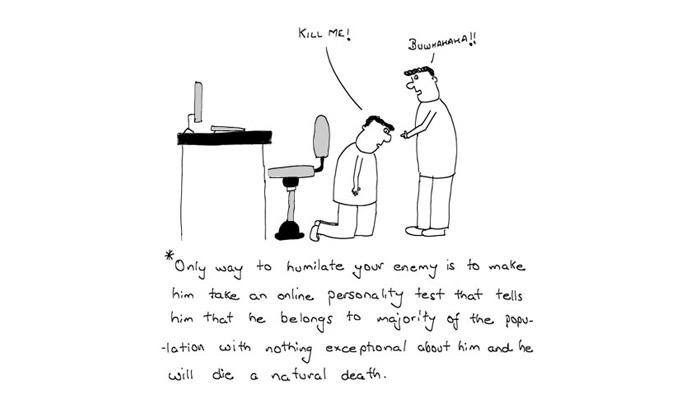 Why You Don’t Have To Humiliate Your Competition

Over Christmas and the New Year I recommended you ten books that have been invaluable to me in my entrepreneurial career.

While most of the reaction was positive, there were some who found it all a little overwhelming.

A few were of the opinion that it was “too much stuff”, a touch “overkill” perhaps..

And maybe it was.

You see, you don’t necessarily have to be a copywriting stud to know how to sell your product or service, or be more organized than a Fortune 500 CEO to run a successful small business in Ireland.

Now if you’ve some lofty goals, say you wish to utterly dominate your niche, humiliating your competition into the bargain, then them books with give you the chops to do just that.

But for the most part, you don’t need to outrun the bear.

Imagine you and another business owner buddy are in the woods camping, having a merry aul’ time, discussing email marketing while drinking moonshine and frying marshmallows over an open campfire.

Out of nowhere climbs a large, frightening grizzly bear with glistening razor-sharp teeth, ready to pounce on you and your mate for dinner.

On sight of the beast you quickly clamber to put on your running shoes, telling your buddy how glad you were you remembered to bring them.

To which your stunned friend replies..“You can’t outrun a bear!”

And it’s the same with not just your email marketing, but your entire marketing efforts as a whole.

As I proved on Monday, decent advertising is rarer than hen’s teeth.

Your competitors are still spending kings ransoms on lame Golden Pages advertising and brochure stype websites, running around like headless chickens not tracking their efforts or conscious of whether their marketing is working or not.

So studying the books I recommended to you was perhaps overkill.

If you want to absolutely CRUSH your competition, they’ll certainly come in useful.

But for the most part, you won’t have to outrun the bear.

You’ll just have to outrun your “buddy”.

P.S. Outrunning your buddy still requires some equipment, at the very least you’ll have to have something that gives you an edge.

So if you’re camping out in the thick dark woodlands of commerce, a direct response website is a must to help you escape the bear, leaving your competition choking on your dust.

Next post: A Meek, Emasculated Pansy Sitting Alone In Cyberspace?