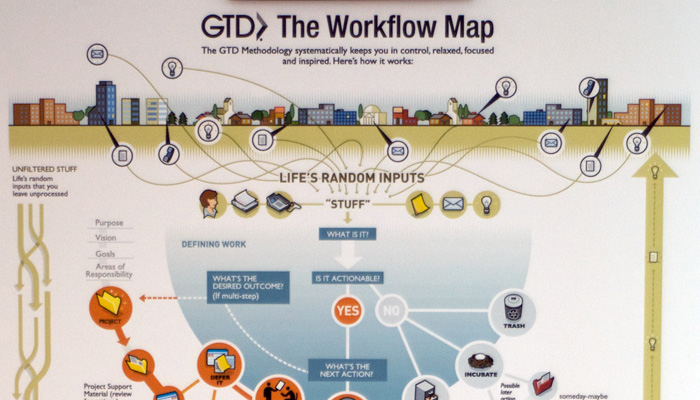 How I Managed To Swat My Inner “Blue Arsed Fly”

Ever had a day where you were running ‘round meeting clients, interacting with customers, taking orders and generally being busy, but still ended up getting very little done?

I used to know many such days.

Running around like a blue arsed fly, getting in my own way, each and every day.

As it turned out it was no surprise my life was like that, given there was ne’er a system to be seen within spitting distance of anything I did…

What I needed was a system which allowed my brain to divulge itself of its contents, and process the mental clutter, and act on it accordingly.

You see, the reason why we’re so overwhelmed and riddled with procrastinatory thoughts, is not because we’ve too much to do necessarily, rather it’s down to not knowing exactly what to do, and when.

Because we never take the time to precisely define how we intend to tackle these tasks, they’re left to stew in our the recesses of our minds, leading to that feeling of uneasiness we often feel. A great quote from David Kekich, an entrepreneur I greatly admire sums it up, “Anxiety is caused by a lack of control, organization, preparation, and action”.

So what to do? Enter David Allen. 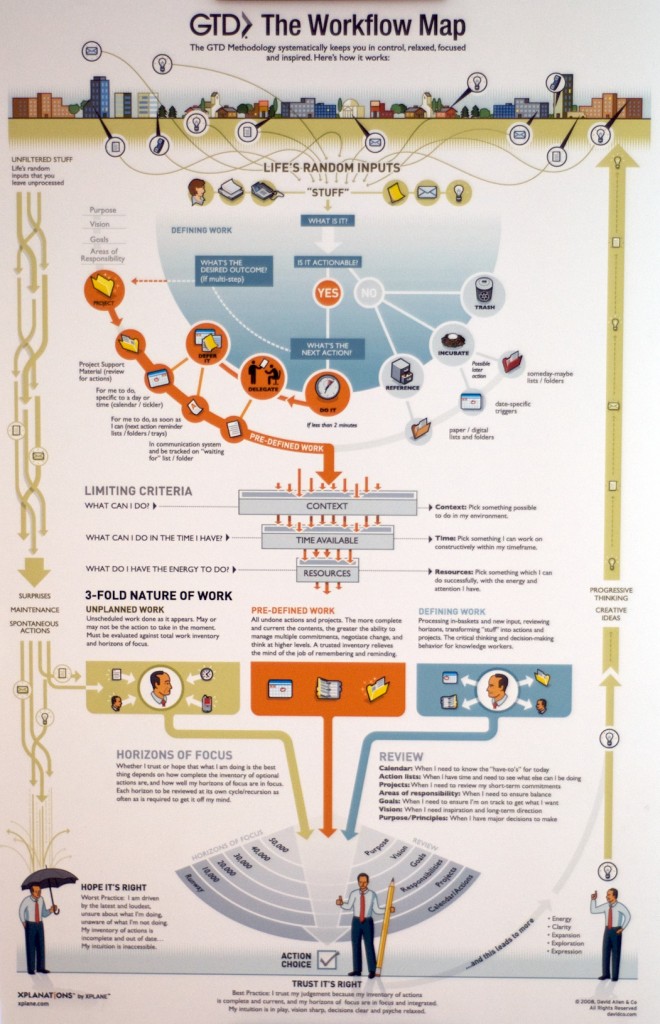 A management consultant with decades of experience consultation for the likes of Microsoft, the World Bank and the Ford Foundation, he wrote “Get Things Done” to address the burgeoning problem of corporate employees having too much to handle and not enough time to get it all done in.

His unique productivity system is based upon capturing all the things that need to get done, no matter how mundane or unimportant, and entering them into a logical system outside of your head and off your mind, giving you the subsequent means to make decisions on these tasks once they enter into this system.

Whether to do them now, delegate them or to break them down into smaller, more actionable chunks.

Every commitment, morsel of work, promise you make or spark of genius, it gets taken out of your head asap and into your system, whereupon you subsequently process it.

So by knowing exactly what needs to be done with everything that enters your headspace, it gives you more mental resources to accomplish what you need to do now, in a more efficient manner.

Frankly, none of this is revolutionary stuff.

There’s nothing new under the sun, as many a wise man was want to say…

Most could probably knock out a semi-decent productivity system themselves in a few days, if they chose to do so…

But few do, preferring to live their lives in the random, ad-hoc manner they run them in, stopping every so often to wonder why they get nothing done.

Don’t be one of those people..

As productivity systems go, this is among the very best. Simple as it is.

Take a gander at what David’s got to say here.

P.S. Okay so, I’ve given you some background on the basics of persuasion, direct marketing and productivity. I reckon you’re about ready to dive into some of the more juicer stuff.

So next up, I’m going to give you the lowdown on what’s been called, “the most powerful advertising toolkit I’ve ever seen”.

A sentiment I entirely agree with as it happens..

Next post: “The Most Powerful Advertising Toolkit Ever Seen”

Previous post: A Big Mistake That Cost Me Thousands In Lost Revenue