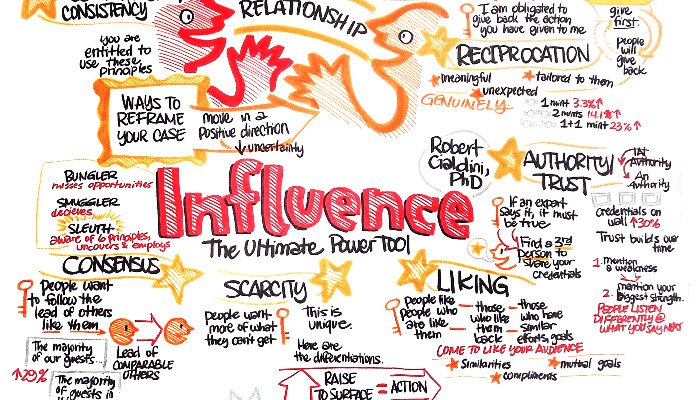 Without This, You’ll Be as Impotent As A Nevada Boxing Commissioner

Do you have trouble getting people to see your point of view?

Do your family bully you with Miracle on 34th street for the 5th year in a row when all you wanna do is watch Indiana Jones?

Ever made a decision you subsequently regretted, going with the flow of popular opinion even though you knew in your gut it would end badly?

Whether it’s getting others to come round to your way of thinking, or inoculating yourself from those you wish to manipulate you, the power to persuade and the ability to influence directly correlate to your success in life.

Without it, you’ll be rendered as impotent as a Nevada boxing commissioner.

Which is why Robert Cialdini’s “Influence” is the first book I’m recommending you read, after you finish polishing off that turkey leg of course.

Cialdini breaks down the science of the influencing process into 6 core principles: social proof, liking, consistency and commitment , authority, scarcity and reciprocity.

Let’s have a look at the principles in use through a typical day in the life of a regular Joe..

Your day starts with your wife in a tizzy as she’s late for a make or break meeting, and she needs you to drop her to the train station. By doing so you’ll be late for work yourself, but you’ll be able to get away with sneaking in a bit late…

So you help her out and give her a lift to the train station.

She gives you a lingering kiss just before she steps out of the car, indicating your good turn will have a large payoff for you later that night. Worth being a few minutes late for.. (Principle of Reciprocity)

On arrival to work you’re immediately accosted by Jimmy from IT, who hits you up for €20 for a 10k run he’s doing in aid of some dog shelter or other.

Jim is always doing some sort of run for charity, or helping out some cause or other, and everybody is always so supportive (Principle of Liking)

Not caring much for dogs much yourself you initially dismiss Jim and his dog saving crusade.

But upon seeing the list of others who’ve signed up, you change your tune.

“Hmm, better not be the odd one out and not give something..”, you think to yourself.. (Principle of Social Proof)

Besides seeing as you’ve always given to Jimmy before, why wouldn’t you this time? (Principle of Consistency)

So rather than deal with the ignominy of being cast as the dog hating freak in the corner cubicle, you dole out €20 and let Jim go on his merry way.

Slightly miffed at being €20 lighter for a dog shelter you swivel around to your desk to find news that softens the blow somewhat.

The Christmas weight loss TV advertising campaign has gotten the go ahead, based upon your insistence the company get celebrity Doctor Patrick Logan to endorse the product. (Principle of Authority)

On your way home you stop to pick up a bottle of wine for what you hope will be a romantic evening in with the wife, and out of the corner of your eye you notice a bottle of wine with an jaw-droppingly high price tag of €80.

Apparently, only 20 bottles of the stuff were shipped to Ireland, and this was the last bottle left in the shop. This sends your impulse buying levels to fever pitch and is enough to push you over the edge for you to buy the bottle of pricey plonk.. (Principle of Scarcity)

Okay, these are fairly trite examples but by being aware of how influence works both for and against you, you can use it to progress you own life, preventing others around you from exerting undue influence on you.

Grab the book here to get the lowdown.

P.S. Who would have thought a book written in a low security lockup would prove any way profitable. Few would have, but that’s exactly what happened, as you’ll find out next…

Next post: A Big Mistake That Cost Me Thousands In Lost Revenue

Previous post: All I Want For Christmas Is Some Marketing Skillz