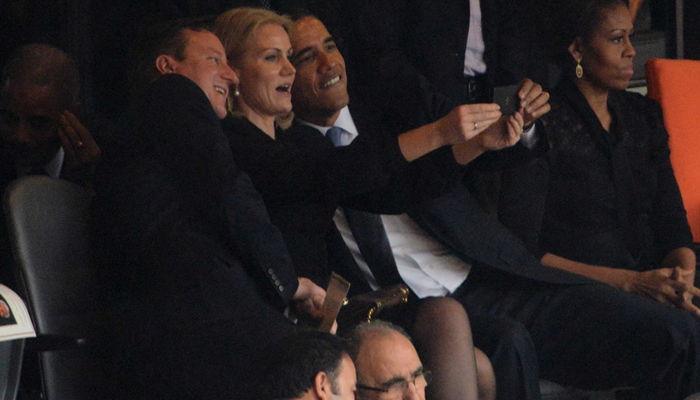 I was on my way back from Carlow on Wednesday evening when I decided to stop off at Castledermot to get some petrol for the drive back to Dublin and stretch my legs a bit.

Whilst waiting in the queue to pay I picked up a copy of the Sun, that august organ known for being a paragon of journalistic truth and wisdom.

Amidst the schlock horror dross on the front page an interesting “news” snippet about the Mandela funeral caught my eye.

Now, I’d been hearing a lot of crazy stuff about the Mandela funeral earlier in the week, like the fake sign language interpreter, Reverend Tutu’s gaff getting done over while he spoke and our own Taoiseach making a balls of the book of condolences, but what took the cake was Obama, David Cameron and the Danish prime minister taking a “selfie” photo of themselves while the ceremony was in full swing.

Now I gave up really caring what lowlife politicians get up to a long time ago, but it’s fair to say that to behave at the funeral of one of the most greatest men of all time was, well, a touch crass.

Having said that, it does provide us with a vital lesson in terms of how we as business owners market ourselves.

A lesson in how me, you and everyone else in the world really operates.

You see, at a time when they should be behaving with dignity and decorum, the leaders of the two most powerful nations in the world could only think about goofing off and arsing about with iPhones.

Sure, they later rationalised their behaviour by telling us the atmosphere at the ceremony had turned jovial and carnival-like in “celebration” of Mandela’s life.

And maybe it had.

But be that as it may, one would have thought they were above all that.

They could only think of themselves, and of snapping a couple of crass selfies with a hot blonde Danish PM.

But being honest, I might have done the same in their situation.

And possible would have a lot of other people.

Well, like everyone else, I think of myself first and foremost.

And unlike other folks though, I’m honest and upfront about it.

But the thing is: everybody else is the same.

Every last one of the 7 billion out there.

Everyone one of us places our grubby little desires before anybody else’s. Whether it’s making money, keeping ourselves fit and healthy or playing around with camera phones.

And ‘twould be prudent to acknowledge this in your marketing efforts.

Everything from your newspaper advertising to your online marketing must be couched in language that speaks to your prospects needs and wants.

Not your product or service. Nobody cares about it.

They only care about their problems, and how you may be able to solve them.

Just like Obama and Cameron’s urge to crack off a selfie with a hot blonde Danish PM.

P.S. A lot of people look down on the likes of the Sun which is understandable, given the thrashy rag that is. But if you’re serious about becoming a better than average marketer, it’s imperative that you learn to speak in the language of the average bloke on the street. Your copy must consist of words that he understands, NOT the ornate high-brow prose of a stuffy aul English literature professor.

The legendary copywriter John Carlton often says that if he had to chose between a near illiterate veteran salesman or a wordperfect English graduate to write copy, the salesman would come out on top every time.

Now don’t get me wrong, you don’t have to actively involve yourself in their drivel, but be very aware in how the tabloids use simple, easy to understand but powerful copy to hook their readers in.

It’s this same kind of copy you’ll need to get good at.

Next post: Remember, Marketing Is a Process, Not An Event

Previous post: How To Banish Blood-Sucking Bottom-Feeders Once And For All