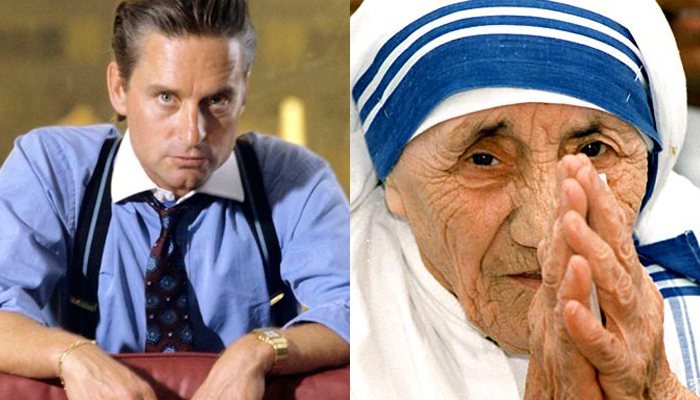 AAs a young fella I was big into music and politics, and religiously bought an Irish music periodical called Hot Press.

Back then in the 90’s I was a different chap to one writing you this missive today, and my politics were somewhere to the left of Che Guevera and Leon Trotsky.

One of my favourite writers in Hot Press back then was a dude named Eamonn McCann.

Eamonn was (and is as far as I’m aware) an out and out socialist anarchist, whose whole shtick was smashing the evil tyrannical capitalist system. Something which (at the time) really resonated with me, believe it or not (they say youth is wasted on the young, an idiom very much true in my case.)

While I loved his writing for the most part, one thing that always puzzled me though was his targeting of little old Mother Teresa .

A lady who, if you were to stop people on the street and do a random vox pop, the overwhelming impression of would be positive.

But for angry anarchist McCann, she was nothing more than a wizened old crone, or a “scheming liar, a hypocrite and a fraud.”

So it turns out, no matter who you are, there will ALWAYS be someone ready to have a pop at you.

Why? Mammy issues? Dropped on the head as a young ‘un? Alcoholic father?

Who knows, and who cares why some people are the way they are.

But have a pop at you they will, and there ain’t nothing you can do about it,

This is a harsh reality that often holds people back in their businesses.

Because they are afraid to offend anyone, they end up meaning very little to anybody.

They hold their true personalities back, preferring to hide behind a meaningless badge of professionalism.

Now nobody is saying you have to behave like a foul mouthed degenerate capitalist like myself and become “the most hated web designer in Dublin™”, but you do have to be real.

Let your personality shine through. Bin the fake corporate buzzwords in your sales and website copy.

Drop the self obsessed bragging about how you’re the country’s leader in your niche.

Crap like that turns people to stone, and hits you hard in the pocket.

P.S. Is your business stagnating?

Tired of cold calling and other non-effective means of generating leads ?

Is your copy so dry and lifeless it sucks the sickly stale sweat off a dead man’s balls?

Does your website have less traffic than Ballygobackwards’s main street?

Well, you’re in luck chico. My free of charge marketing clinic is here to help. If you have a marketing dilemma you just can’t get to the bottom of and could do with a fresh pair of eyes, you need to get in touch to see if I can help. I can’t promise I will be able to fix your problem for you, but as it’s free, you got nothing to lose by getting in touch, have you?

The only caveat is I WILL film the answer for my youtube channel. Don’t worry, I’ll keep your details anonymous (unless that is you don’t want me to) but if this is a problem, then you should get in touch.

Previous post: In The Land of The Blind, The One-Eyed Man is King